My father is a Tibetan lama. When he was still just a baby, he was recognised as a tulku, a reincarnation of a Tibetan Buddhist teacher. He lives in the UK now. He met my mother in Dalhousie, India, when she was teaching English to Tibetan refugees. They fell in love and he gave up his monastic vows, but being a tulku isn’t something you can give up. It is who you are.

He is still the head of a monastery in Kham, Qinghai, so when we are there, it’s a busy time – we get invited to a lot of houses. I was seven the first time I went. As an adult, I started going back regularly, to see friends and family. I always take my camera. I have been photographing Lhamo Tsertso and Lobsang Chödron, the daughters of a close family friend, since they were two or three. I have made portraits of them every year that I’ve been back since. They’re 19 now.

Twins are an obvious subject for photographers but, as the project has stretched over such a long period, it has evolved into something more. The girls have grown and changed with the environment around them, yet the resemblance between the two remains constant. In this portrait they were 15. When I arrived with my camera, they rushed off to their room to get changed. But they were gone for about half an hour, which felt very different from the previous years. 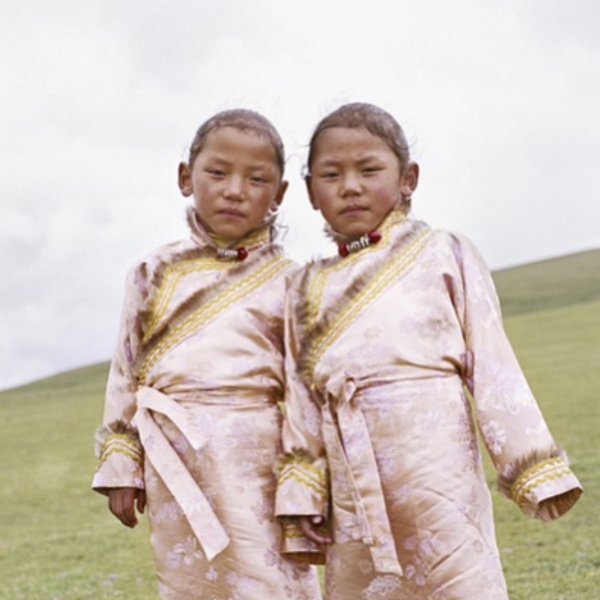 Before, they would just stand there, not bothered by the process. This time, they came out wearing these incredible gingham dresses, reminding me of Dorothy from The Wizard of Oz. They had matching watches and they’d done their hair. It felt like a real transition: they’d started to become aware of how they were presenting themselves. We went out on to the balcony and, after a few shots, they picked up their rabbits. They had just celebrated their birthdays, and their father had bought them these albino rabbits as a gift. And there it was, the shot.

Tibet is very rich in colour, lots of bright reds and greens. I’ve taken a lot of photographs in monasteries with monks and nuns wearing deep shades of maroon. So the colour palette here is unusual. The girls’ father is an architect, and they live in a town that was levelled by an earthquake in 2010. This is at their new house and the surrounding area was still quite dusty from building work. It was summer, too, and, being at 12,000ft, the light is crisp, harsh even. That’s why I always shoot on film. Digital just doesn’t do it justice. You can’t get the black tones in the shadows, or the bright highlights of the sun. Only film can handle the contrasts between the two. 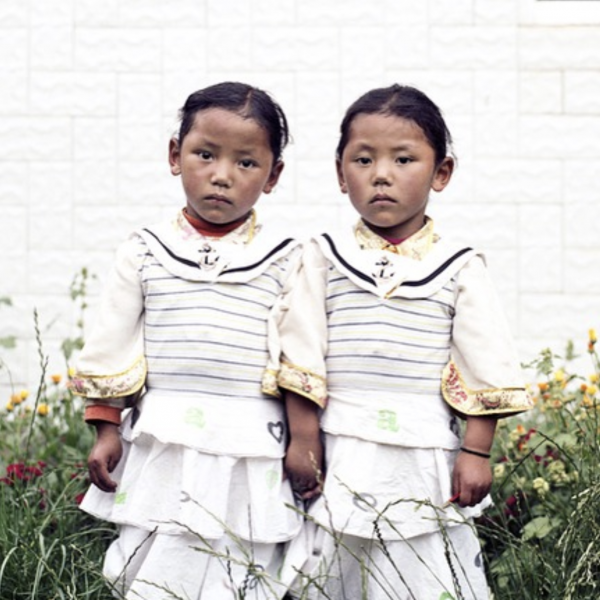 The rabbits speak to the Chinese influence, a sign of how things are changing. The concept of a pet rabbit is so foreign to the traditional nomadic way of life. Life was simple and, until recently, if you owned an animal in Kham, it had to have had some sort of purpose. A dri (female yak) will produce milk, butter, yoghurt, meat, fur, wool and glue (from the hooves) – none of the animal is wasted if it dies. People have such a respect for life and an awareness of death. Albino rabbits don’t like harsh climates – I don’t think they are able to survive temperatures as low as -10C. These rabbits didn’t last the winter.

The girls speak Chinese to each other, and to their father, and Tibetan to their mother. I speak a Khampa dialect, a colloquial Tibetan with a strong accent. Someone once told me they could almost place my accent to the mountain on which I’d learned the language.

Kham is one of the most beautiful places on Earth. You have no idea how many stars there are until you’ve seen the night sky above the plateau. But it is the people, not the place, that keep me going back: my family, my friends. Some of the best nights of my life have been sitting in my father’s small room at the top of the monastery with the monks and my family, just chatting and cracking up, real belly laughs. The time we have there is very special.